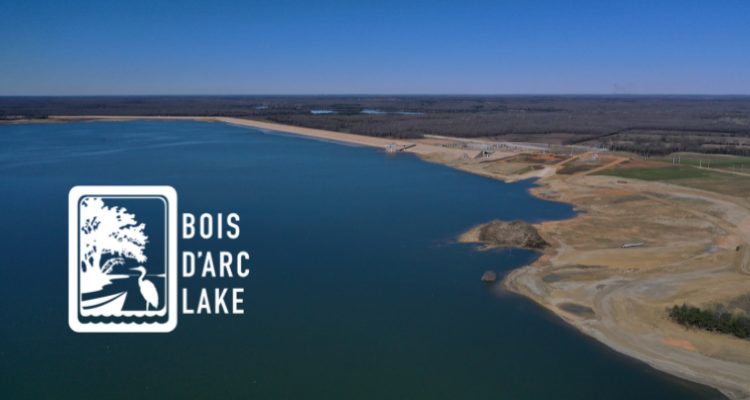 The North Texas Municipal Water District (NTMWD) has a legacy going back more than seventy years to meet the region’s needs today and tomorrow. As part of that vision, discussions began in the 1980s for a new water supply reservoir to do just that for our growing population. Fast forward more than four decades and another milestone is reached as NTMWD is on the brink of realizing that vision for the nearly two million North Texans we serve – the name Bois d’Arc Lake has been officially recognized by the U.S. Board of Geographic Names (BGN) of the U.S. Department of the Interior (DOI).

While to many, this may seem nothing more than a clerical action, however this important federal recognition along with previous approval by the Texas Geographic Names Committee, means Bois d’Arc Lake will be included on the Federal Map of geographic names and formally recognized by various federal and state regulatory agencies.

The 16,641-acre lake is in the final phases of construction and located northeast of the city of Bonham in Fannin County. Named after the Bois d’Arc tree abundant in the area and a familiar creek with the same name, this is the first new major reservoir in Texas in over 30 years. Rainfall and flows from Bois d’Arc Creek will be the primary source of water for the new lake. NTMWD began impounding (or holding) water in the lake in April 2021 and is on schedule to begin delivering treated drinking water later this year.

The remaining major construction efforts close to completion include work on the two-mile long dam, water treatment facilities, 60 miles of water pipelines, and over 17,000 acres of environmental and habitat improvements to offset the footprint of the lake. Environmental enhancements include planting of five million trees, stream restoration and reestablishment of natural wildlife habitats.

NTMWD is partnering with Texas Parks and Wildlife (TPW) on recreational opportunities including boating, fishing, and hunting. NTMWD constructed three public access boat ramps with day-use picnic areas which remain closed until the lake is complete and meets all safety requirements to open. All recreation activities on Bois d’Arc Lake will follow state regulations as determined by TPW. Boating, fishing and hunting are prohibited at this time. NTMWD will notify the public when the lake is open.

“We look forward to a day hopefully soon when we can celebrate this great achievement for North Texas,” said Covington. “Bois d’Arc Lake has been many decades in the making, and it will provide the essential water supply needed as well as outdoor fun for generations to come.”

Bois d’Arc Lake is the first major reservoir to be built in Texas in over 30 years. Located in Fannin County, the lake is owned and operated by the North Texas Municipal Water District. While the lake’s primary purpose is to provide drinking water to one of the fastest growing regions in the country, it will also offer future water recreation and outdoor activities.

The North Texas Municipal Water District (NTMWD) was created in 1951 as a special district of the state. Today, NTMWD is a regional wholesale provider of water, wastewater and solid waste disposal services for approximately two million residents across 10 counties – a service territory covering 2,200 square miles. With an annual operations budget of $570 million and 900 employees, NTMWD serves about 80 communities with drinking water, more than 1.3 million people with wastewater collection and treatment, about 900,000 people with waste management services, and operates one of the largest advanced water treatment plants with a capacity of 876 million gallons per day.  www.NTMWD.com